Bob Jones and the Push Toward A Raw Refinement

There is something about the character of 65GRAND. At an opening the atmosphere is tons of art people who all know each other in one way or another having a good time. And then Andrew Bird shows up. 65GRAND openings increasingly provide a carefree and relaxed community, as opposed to most openings that are worse than the first day of high school but with adults, so there is no excuse for the social retardation.

But the real atmosphere of the gallery is when it is just you and a few thoughtfully installed works. You feel like you are breathing in a rarified air. Everything is careful and considered, as if Richard Tuttle were an interior decorator. So to some that means the apartment gallery is rough around the edges. But it is a specific environment for the specific work that Bill Gross shows, and he does so with a sharp eye, one refined through experience, like a self-taught curator. So what better venue to showcase the sparse and withdrawn work Bob Jones & Ian Pedigo, as 65GRAND did from September through October of 2006? 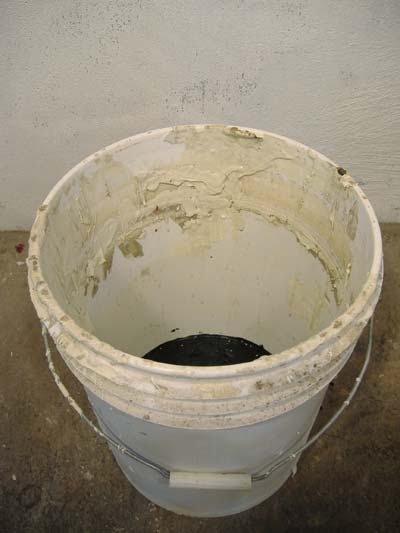 One could consider Bob Jones’ work dirty, messy or even sloppy. It is dirty, it is messy, but it is not sloppy. Sloppy implies carelessness and disinterest. This work is made of some very carefully arranged dirt; it is elegant and minimal. Take for instance Well (2006) a white plastic bucket with some thick black paint in the bottom, its sides coated with cracked bits of a sickly yellow-gray latex enamel. The longer you look at it, the more it becomes apparent every bit is intentional. It is not really sloppy at all, because every spot of paint, every mark, works together. It is a certain harmony that not everyone appreciates, but it is a special and beautiful one. It is austere and elegant, like a shopworn angel. Those deep grooves made in the tar-like black oil paint are like waves upon the waters of a gloomy night. That thick deep black suggests a bottomless empty pit, or a solid vein of coal. And there’s the beige lumpy cracked lines of paint on the side - these are the aesthetic moments. They extend onto the floor, layers of paint from over the decades showing through. This makes the installation more than a venue for some art; it becomes part of the art, an environment of art. Much better than a sterile white cube curio cabinet. 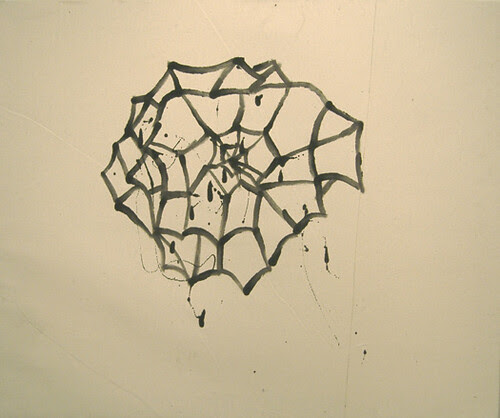 Hanging up above Well is a painting of a spider web. Hardly a painting at all, some tentative marks in black on raw canvas. In places the paint permeates the weave like old motor oil. In other places it is chalky and gray like tempera poster paint. But it is neither, it is Rustolium. At the same time it is a dirty mess, it is a thought fetish- You look at the web and become entrapped by thoughts of the mechanics and structures of painting. Painting as a thing, canvas, stretcher, it is an object. Your eye traces the lines the “paint” makes, the lines made by the artist and the lines made by the drips and seeps indecipherable from one another.

It’s not all so dead serious, there’s a certain humor as well. The stack of balls. What is that? It is a snowman and it is sitting on a platform a top an old style gas furnace. It is also funny because it is so sad and pathetic; it is hardly a snowman at all. Really, as Gross points out, it only looks like a snowman. But here comes the seriousness again because all the objects in this installation barely exist. As much as they stumble along the line between meaningless trash and art, they also tip toe from the abstract into the representational and back again. That is a ball of plaster with twigs in it, no it is a trophy. We are cued in by the placement on the wall at such a height as a game head might be hung. 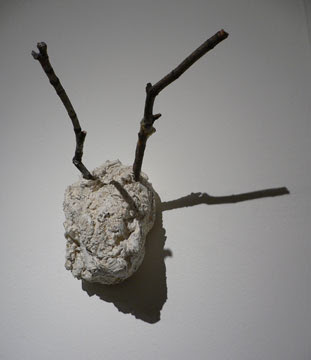 Also the title, Trophy (2005), is an interesting choice. It doesn’t indicate a specific animal, and it brings in the connotations of sport, conquest and achievement. But as an achievement, this trophy is nothing to be proud of. Here are the time-honored practices of painting and sculpture, but everything here is small and pathetic. The huge pile of rags is a nightmare. It is heap or dirty cloth and dust should be dead, it should be found in an attic and thrown away. But instead it has a real presence. It is more powerful and substantial than a painting or a sculpture because it is like a snowball that’s rolled down a hill, gaining size and picking up debris along the way. The tiny little, abstract painting is hidden in the corner. It’s like a little swatch of a Pollock. Like a little reproduction in a catalogue essay that is only referenced for a second, “see: fig. 9, detail.” Bob Jones little Orbit is a sticky, sickly object on the wall. Jutting out a bit and encrusted in gobs of oil, you can’t take your eyes off it, or get your mind away from it. It is a scab. It’s not even a proud declaration, it’s just saying, “here I am, I think.” 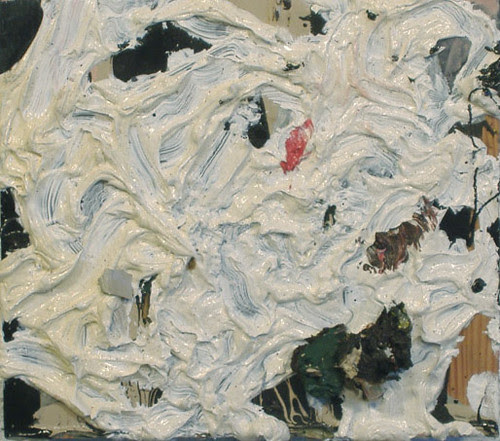 Jones’ work is talking about material and conceptual concerns, academic stuff. Thoughtful stuff. And he his not giving it any twists or contemporary tropes. The work is calculated, but not as some snide response or commentary. No, this work is just being that terrible old art for art’s sake. Art that is what it is, and not something else. That is refreshing and important. It is not some statement rejecting the art establishment; it is just not worried about that. It is not ignorant art. This work is not carrying on as though it were still the 70s. It is here and now, it is just choosing not to participate in a poppy ironic way. 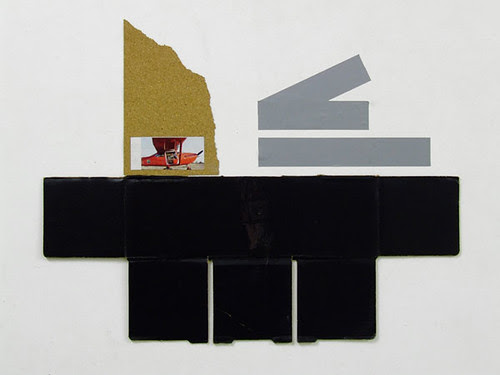 Jones is not alone in this, there are others. Ian Pedigo, for one, whose work Avion (2006) does similar things humble means in the hallway installation, but is all its own. A careful selection of materials, each laid out, the adhesive removed from the duct tape in a painstaking archival process, and then arranged as a new thing. A thought. It looks like a strange linguistic symbol, or in reference to an ideogram. The form is birdlike, wing-like; it seems light and airy. Oddly, the collage image of a plane is the heaviest, earthbound element of the piece. Gedi Sebony is doing clever material works with everyday items as well. His door piece, Untitled (2006) for the inaugural show at Rowley Kennerk Gallery was a wooden monolith threatening to tip forward. He took a standard hollow plywood door and stripped off the front, flipped it around and reapplied it. So instead of having just a wooden door, you had this weird slab, a mystery as to whether it was solid or not, covered in scratches and marks that might have been intentional expressions. Or not. And then leaned against the wall, almost flush, as if to pitch forward at any moment. This is an important and revitalizing turn. It shouldn’t be hailed as a return to anything, just a commonality in thought. Where all pretensions have been stripped bare. 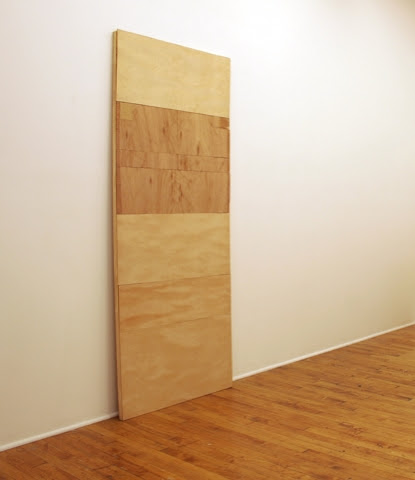 As Jones made Trophy, as he made all the pieces in the show, the idea for it came about as the work was being created. He didn’t set out to make a thing that looks like “big game hunting,” nor did he make something and then later assign it the designation of a sculpture of big game hunting. The piece reveals itself to Jones as he is making it. The work in this show came about as ancillary to his studio practice. All this stuff was happened upon in one way or another while he was trying to sort out something else. That makes this show magical, because it adds another layer to these glimmering little shitty pieces of nothing. One more little bit of evidence that something more than a snot-nosed artist playing a trick on is occurring. It could really go either way, as a huge flop, us not buying it. Or as a success, as it does. This is achieved through a profound belief and doubt and what he is doing. Through sheer will do these things make there way out of the dustbin and into the world of art.

This work, both Bob Jones and Ian Pedigo, is all about looking at the incidental and ancillary stuff. It should be an accident, but the cracks in the paint stuck to the side of a buck are the aesthetic moments. The way bits of tape and cardboard are placed on the wall to make Avion, that is the highlight of your day. How do you prove that? You can't the more you try to explain why that is good, or right, the more you sound like a liar.

i agree with you, it is difficult to put into words why something like this is pleasing to look at. Yet so much of it looks unfinished or even disposable. It's Postminimalism all over again. Somehow such gestures are relevant again, though. I like to think about these works in relation to grandiose or baroque gestures like Matthew Barney. But then sometimes I can also look at dried stucco and ruminate on its tiny cast shadows and subtle harmonious chaos. It's not that such things are brilliantly crafted, but that as an observer, one is prepared to become unhinged by the unexpected, even the banal.

I have to say that this is a different art form. I have thrown away paint drop cloths and buckets of paint that had more expression than this exhibit. However, I think I understand what his type of art represents If there is random art I think that this is it. It’s the art that happens when we are producing real art . I think real art work, be it painting a wall, or using the last bit of house paint in a five gallon drum or that paper pallet we mixed our oil paints on could apply here. What we leave behind is as random as the paint drips on our skin from trying to paint a ceiling. Our art is producing a byproduct of art. I think that this blog represents the deconstruction of art to a pure form untouched by human hands. I’m not sure what to say, but this is a much different art form presented at a gallery than Ive seen before.