Here are some shows we’ve checked out that are worth you going around and checking out too, if you haven’t already. There is a range of stuff, so you are bound to find something that you like.

Jason Robert Bell @ Thomas Robertello
This gallery should be getting a lot more attention. John Delk: Suspension of Disbelief was one of the best offerings of the fall season openers. And this show is good too. It is 100% into its singular vision: the life and times of Kala, a female sasquatch. 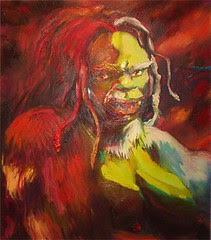 The work is over the top in its use of vibrant colors, brushy paint application and stark materiality. From the huge life size statue of her, gigantic oven-knob nipples and all, in the gallery’s front window, you get a sure idea of Bell’s utter dedication to an equal mixture of sci-fi narrative and base humor. At the opening Bell enthused over a favorite writer, Philip José Farmer. A man of cult status, whose fans publish a regular zine about his pulpy writings and organize a yearly pilgrimage to his home in Peoria, IL.

The paintings certainly dabble in the 80s bad boy neo expressionist look. And like the blatant intensity of 80s panting, these works are partially winking and smiling, partially seriously into garish color, nudity and large-scale brushwork.

Kelly Breslin @ Skestos Gabriele
The show looks very good. The work fits in with the generic popular aesthetics of now: Careful material selection, careful consideration of process and a mixture of minimalist and post minimalist concerns with pop, pop culture and an affinity for things that are stereotypical (like the ocean and tropical paradise) but also ugly and are loved for being the opposite of good (neon clashing colors) So this show is good, but it is also a little bit blah, and a little bit annoying. But since it causes hemming and hawing on the part of the considerate viewer, there is something to it. A few pieces really stick out for combining all the things I was just talking about, but resulting in a product that isn’t just a summation of that, but something more. 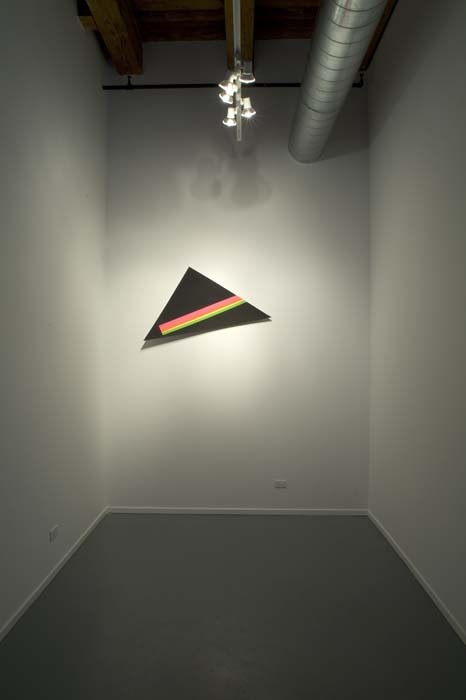 The best piece is Anywhere. A triangular painting-object that is tucked away in a hidden gallery. The little alcove feels more like a niche in a museum than a gallery. And with the single piece, hung high with a spot light on it, and opposite a solitary bench, the sense is almost religious. Anywhere is a tight object, each bit of material seems tediously decided and brought into the piece. From the dull light-sucking texture of the blackened oak to the placement of the neon stripes, everything has been thought through by a human mind, but comes off machine like. the oak support bows at the points and it hovers on the wall. And then you realize it “totally looks like Dark Side of the Moon” and the religiousity is almost ruined. Except stoners who listen Pink Floyd over and over, looking at the cover of the album, think as much about that image as the viewer does of this piece. Is this an acceptable place for abstraction to go? Is that what it takes to make it OK in this day and age? Sure it doesn’t really look like the cover of Dark Side of the Moon, but it is has enough elements to it that more than a few people looking at it make that connection. That is something Breslin has to be aware of. I’m not sure if it is a good idea for abstraction to be so poppy, so gaudy. But then again, Dark Side of the Moon is a great album, and this piece brings together the everyday of wood and tape with the everyday of pop culture and convincingly works it into “high” art.

Anonymous said...
This comment has been removed by a blog administrator.
6:42 PM